Candidate to the EUNIS Board of Directors 2020

Stuart McLellan arrived in France from Scotland in 1984 after completing a degree in Mechanical Engineering at Glasgow University. He completed his education with an further education Information Systems & IT degree from the Conservatoire national des arts et métiers (CNAM).

After working in the private sector in various IT services companies, he integrated La Rochelle University, as a network and systems engineer. After specializing in Information System Security &HPC infrastructures  he joined the prestigious Ecole Normale Superièure de Cachan in 2007 as head of Network, IT infrastructures, HPC and ISSM. He was appointed CIO in 2011. In 2015 he was appointed CIO of the French national Natural History Museum in Paris.

In January 2018 he joined the French NREN RENATER as regional REN activity Manager and has been recently appointed Customer Engagement Manager. He is involved in projects at regional, national and European levels.

A member of EUNIS since 2007, he was communication and logistic manager for #EUNIS18 Paris congress organizing committee, and member of the scientific committees for #EUNIS19 and #EUNIS20.

As CIO at the Ecole Normale Superièure he participated in the Benchmarking (BenchHEIT) task force.

Stuart McLellan was co-author of the #EUNIS19 Elite Award for excellence in implementing Information Systems for Higher Education winner is the paper:

At RENATER  as well as ensuring the quality and delivery of SIS and digital services to institutions at regional and national levels, I am also involved in European and international projects, working closely with GEANT (LHCOne, LSST, EOSC) and participate at annual conference GEANT-TNC (this year’s cancelled event: //tnc20.geant.org/).

With now almost thirty years cumulated  experience of IT and SIS in the University and Research community, and now with the added vision of an NREN,  I believe I can be of value to EUNIS and put this to use for our community.

If my candidature is retained , it  would not only be an honor for me,  but also the opportunity to increase my implication in EUNIS and the EUNIS community, from which I have so benefited from since my first membership in 2007. 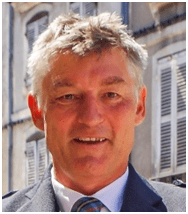