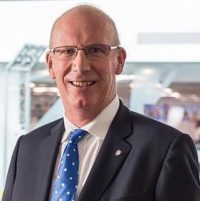 Professor Allison was educated at Northallerton Grammar School, before studying Geography at Hull University, gaining a B.A. in 1982. He was awarded a Ph.D. in Geography from King’s College, University of London in 1986.

Professor Allison has contributed to a number of organisations including the Natural Environment Research Council, Higher Education Funding Council for England and the Department for Business Innovation and Skills.

He also sits on the Board of Midlands Innovation, a partnership between the Universities of Aston, Birmingham, Cranfield, Keele, Leicester, Loughborough, Nottingham and Warwick.

He has been a Fellow of the Royal Geographical Society since 1990, serving on many committees and being elected Honorary Secretary from 1997 to 2000. He has also been Chair of the British Society for Geomorphology.

Professor Allison is the recipient of a number of honours and awards for his research and teaching including the Cuthbert Peek Award from the Royal Geographical Society, Charles Lyell Award from the British Association for the Advancement of Science and the Jan De Ploey Prize from the Katholieke Universiteit Leuven.‌