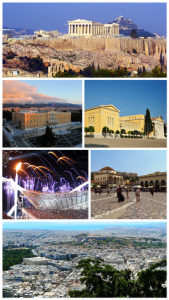 EUNIS 2021 will be hosted by the Greek Universities Network (GUnet). Owing to the Covid-19 pandemic, it will be held in virtual format and with free registration.

We at GUnet look forward to welcoming you to EUNIS 2021 in “virtual Athens” with a warm “yassou”, literally “health to you”, which is particularly relevant today.

Athens is the capital and the largest city in Greece. Athens dominates the Attica region and is one of the world’s oldest cities, with its recorded history spanning over 3,400 years, and its earliest human presence starting somewhere between the 11th and 7th millennium BC.

In modern times, Athens is a large cosmopolitan metropolis and central to economic, financial, industrial, maritime, political and cultural life in Greece.

The heritage of the classical era is still evident in the city, represented by ancient monuments and works of art, the most famous of all being the Parthenon, considered a key landmark of early Western civilization. Athens is home to two UNESCO World Heritage Sites, the Acropolis of Athens and the medieval Daphni Monastery.