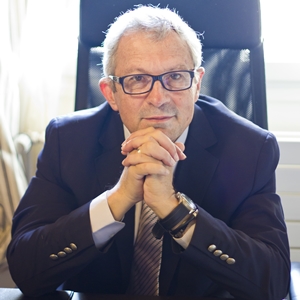 Joseph Sifakis is Emeritus Senior Researcher at CNRS, full professor at Ecole Polytechnique Fédérale de Lausanne (EPFL) and the director of “Centre de la Recherche Intégrative” (CRI) in Grenoble. His current research interests cover fundamental and applied aspects of embedded systems design. The main focus of his work is on the formalization of system design as a process leading from given requirements to trustworthy, optimized and correct-by-construction implementations.

Joseph Sifakis is the founder of the Verimag laboratory in Grenoble, which he directed for 13 years. Verimag is a leading research laboratory in the area of embedded systems, internationally known for the development of the Lustre synchronous language used by the SCADE tool for the design of safety-critical avionics and space applications.

In 2007, Joseph Sifakis has received the Turing Award for his contribution to the theory and application of model checking, the most widely used system verification technique today.

Joseph Sifakis has had numerous administrative and managerial responsibilities both at French and European level. He has actively worked to reinvigorate European research in embedded systems as the scientific coordinator of the « ARTIST » European Networks of Excellence, for ten years. He has participated in many major industrial projects led by companies such as Airbus, EADS, France Telecom, Astrium, and STMicroelectronics.

Presentation Title: The Internet of Things – The Ultimate ICT Revolution