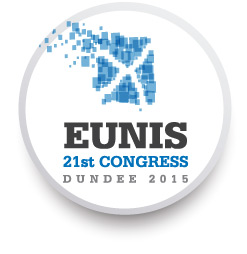 Submissions for the EUNIS Awards are now closed.

Thank you to all those who entered submissions for these awards.

The winners will be announced accordingly.

Awards at the Congress

There are three awards handed out at the Congress.

The EUNIS Elite Award for Excellence

This award is organised by the EUNIS Executive Secretary who will make a separate call for submissions for the award through the EUNIS website. The award is an honorary one. The winner of the award will be invited to speak at a full session of the Congress.

This year the EUNIS Elite Award contest was again of a very high standard.
The five senior members of the jury selected three projects:

The winner will present their project during a plenary session on June 10 at the EUNIS 2015 Congress, University of Abertay, Dundee, Scotland, 10-12 June. The authors of the other two projects will present their projects during Congress in their respective tracks. Please check the Congress programme for information.  In addition an Award Ceremony will take place on June 11th at the Congress Gala Dinner.

With my congratulations to all of the competitors
Jean-François Desnos

This award is organised by the EUNIS E-Learning Task Force. The call for submissions for the EUNIS Dørup E-learning Award appears at the same time as the general call for papers. The winner is selected by the Dørup Award Judging Panel from a shortlist of all submissions for the award. The award is not a monetary one but the winner receives a certificate, a print of a painting by Danish artist Maj Dørup and a refund of his/her Congress fee.

The Best Paper Award is a monetary award funded by the Congress. The winner of the award is announced during the Congress by the EUNIS Executive Secretary. The award is organised by the host institution and the winner is selected by a judging panel consisting of between three and five members.

We would like to announce the shortlisted papers for the Best Paper Award at this year’s Congress.