EUNIS was celebrating its 25th anniversary at the 2018 Annual Congress in Paris. That’s a proper time for making summaries and outlining plans for the future. To mark this special moment EUNIS decided to adopt a new logo. Its concept has been accepted at the EUNIS General Assembly in Paris, and we are happy to share it with you now!

It is based on the isotype inspired by the map of Europe resembling connections between universities and HE institutions which EUNIS aims to enhance.

We would like to take the opportunity to express our gratitude to SIGMA  Gestion Universitaria, a long-time EUNIS member from Spain, for its invaluable support in designing the logo. 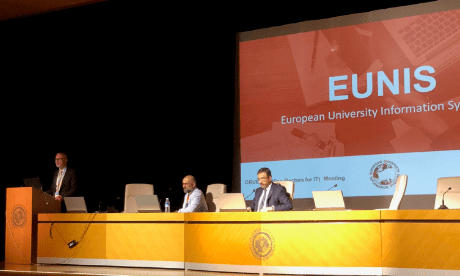 The seminar on Management and Government of IT in Universities is held on 24-25 May 2018.

The Sectoral Committee on Information and Communications Technologies of the CRUE Universidades Españolas (new brand of the Conference of Rectors of Spanish Universities) was created in 2003.  Its role is to advise in the field of information and communication technologies to improve the quality, effectiveness and efficiency of Spanish universities and promote cooperation among them.

Read more at the event web.

2018 elections: call for candidates to the EUNIS Board of Directors

EUNIS 2018 General Assembly will be held on 7th of June (Thursday) 2018 during the EUNIS Congress in Paris. All official representatives of EUNIS Members are entitled to take part in the meeting. This forum is where all the decisions related to the EUNIS’ structure and organisation are made and updates from the EUNIS Task Forces and Board are presented. The General Assembly has two other very important duties: the election of EUNIS members to the EUNIS Board and approval of the EUNIS budget that will be presented by the Treasurer.

The representatives of European Higher Education and Research institutions (regular members) having paid their annual fee, take part in the voting and elections to the Board.

In June 2018 the 3-year service of four Board Members will come to the end:

Mr. Vogl, Mr. Szmuc and Mr. Cordewener are candidates to their re-election. The biographies of all Board members can be found on the EUNIS website.

All the above have the opportunity to be re-elected, but we are actively soliciting new candidatures to the EUNIS Board among the regular members – especially since one current board member is not running for re-election. If, as a regular member representative, you are interested in putting forward your candidature to act in the Board of Directors of EUNIS, we kindly ask you to send an email by close of business on Tuesday 22nd of May 2018 with a short biography, photo and the motivation of your interest to: Jean-Francois Desnos, EUNIS Executive Secretary: jfdesnos@orange.fr.

Read more here and register at the Congress website.

Don’t miss the pre-Congress workshops and seminars that are held on 5th of June:

A reminder that the early bird registration for the EUNIS 2018 Annual Congress ends on 30th of April 2018. Register early and save €100. To book your place please go to the Congress website.

The Congress will take place on 6th – 8th of June 2018 in Paris, France. Read more here. Don’t miss the pre-congress workshops and seminars that are held on 5th of June: